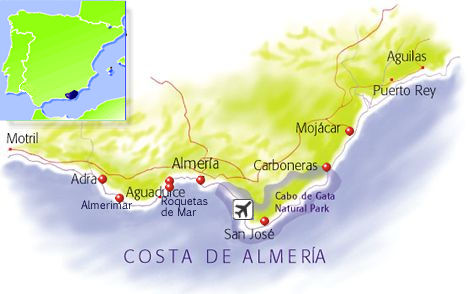 The Spanish coast of Almeria (Costa Del Almeria) is renowned for its vibrant festivals and fiestas. Every beach town organises a Cine de Verano (open-air movie theater) and a music festival, and there is also an annual fair during the spring and summer months. A special event that should not be missed is the Noche de San Juan, the shortest night of the year, when locals and visitors’ light bonfires on the beach. In addition, the Costa Almeria also hosts the curious tradition of El Entierro de la Sardina, which marks the end of the Carnival season.

How to get to Costa del Almeria by bus or car

If you plan to take the bus to get to Costa del Almeria, you should know that the journey can take a while. A bus ride from Murcia or Alicante will take around 2.5 hours and cost you around €18. In contrast, driving to Mojacar will take about 90 minutes and cost around €15. The route includes the Autovia del Mediterraneo and Los Gallardos-Turre-Mojacar. It also includes a toll road (€12 per car), and a regular highway system.

The Costa del Almeria is a 200 km long stretch of coastline in the south-east of Spain. It is home to the popular resorts of Mojacar and Roquetas de Mar, but also has a range of lesser-known places worth visiting. The Almeria Airport is located 9km east of Almeria. Some of the main attractions include the guaranteed sunshine, semi-desert beaches, and UNESCO biosphere reserve.

If you are on a budget or fancy taking in the wonderful scenery, you can take the bus. The coastal towns have a municipal bus network, but they are also linked by inter-municipal busses. There are also organized bus trips from the towns to wineries and mountain villages.

If you are considering driving to Costa del Almeria, you will first need a car. You can get your car at a local rental place or get one at the airport. If you plan on hiring a car, be sure to bring your insurance certificate and passport. Alternatively, you can book a shuttle service to pick you up at the airport. Then, you will be able to drive to the city.

If you want to travel by bus, you can take the Alsa bus from Almeria, which travels from several cities in Spain. The buses stop at almost every village along the way. However, make sure you have the right credit card to use the service, as Alsa may not accept cards from people living outside Spain. You can also book tickets through third-party companies or at the bus station. Another good option is a car-sharing service like BlaBla Car.

The Costa de Almeria is a 200km long stretch of coastline in the south-east of Spain. It is home to the popular resorts of Mojacar and Roquetas de Mar, but it also boasts a range of lesser-known destinations. It is the ideal setting for family holidays, as prices are much lower here than on the Costa del Sol.

Getting there by boat

Ferries connect Almeria with North Africa, the Canary Islands, and Morocco. The city’s port has become a major destination for visitors from around the world, and it has a unique mix of medieval and multicultural history. The city is also a major hub for cargo and transport ships. The modern port has been in operation since the 19th century, but has been a major maritime stop for centuries.

If you’re driving, you can park your car at the waterfront or on a side street. There’s also a public bus service that leaves every 20 minutes during the day. This service is run by ALSA, the public transportation company in Andalusia.

The Costa de Almeria’s most popular beach resorts include Mojacar and Roquetas de Mar, but there’s also a wide variety of less well-known destinations. The city’s airport is just 9km away, and the beaches are surrounded by beautiful nature reserves. There are even theme parks that are part of the desert, UNESCO Biosphere Reserve, and Mini-Hollywood.

The easiest way to travel to the Costa del Almeria region if flying from the UK is to head to Spain’s Almeria Airport (LEI). The distance from the UK to Almeria is approximately seven hundred and forty kilometers. However, you may be able to save money by flying at off-peak times. Ticket prices are generally much lower in October and early January, when many people avoid flying. In addition, flights from Malaga Costa del Sol Airport are generally cheaper on Wednesdays and Saturdays.

To get to the Costa del Almeria region by plane, you can book a cheap flight with a European airline. Ryanair is one of the most popular airlines in Europe, and it has the most international passengers. You can get to Almeria via plane with Ryanair and EasyJet amongst other popular airlines.

Despite being a popular destination, Almeria can be more affordable during off-peak times. The weather is warm and sunny, and the city is much less crowded than in the summer. However, the busiest times of the year are during school holidays, Christmas and New Year. Local bus services are inexpensive and cover most of the city’s major attractions. Alternatively, a taxi ride about town is also reasonably priced.

Almeria is also the homeplace of the Garner family who are regulars on the popular Channel 4 TV show, Sun, Sea and Selling Houses so if you do take a trip there be sure to check them out and get your picture taken with them!

Finding a Property For Sale in Benijofar